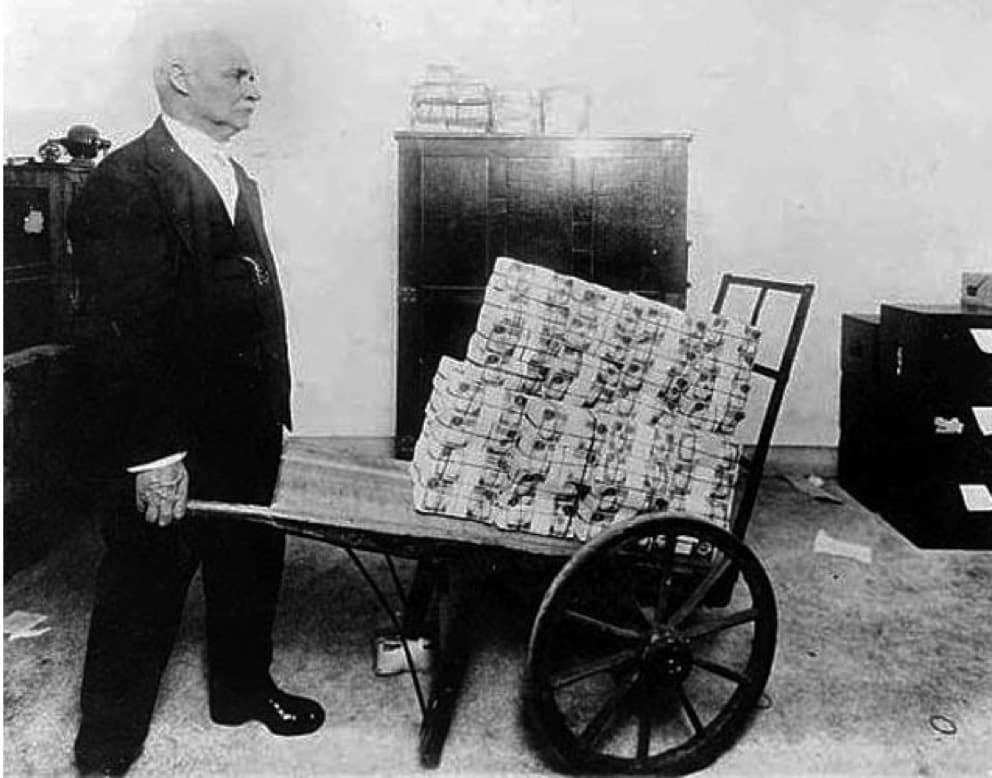 If there’s one thing investors can agree on these days, it’s that the US economy (and by extension the stock market) is at an inflection point. The question is this:

Where do we go from here?

We will discuss each of these possibilities in the post that follow, so grab a cup of your favorite brew, kick back and come along for the ride.

Not surprisingly, his tweet was later memory-holed. However, the internet has ways of preserving data that the censors would like people to forget. (you can read about it here).

Or is this simply hyperbole?

Time will tell, but he’s certainly not alone in having this view.

The problem is that it’s been an increasingly less fringe-view (if not altogether more popular) since the Federal Reserve first embarked on its unprecedented monetary experiment in 2008.

It’s easy to see why people would expect high inflation, if not hyperinflation, when one considers that the Federal Government (through fiscal deficits and monetary policy) has increased the money supply by approximately 25% in the last 12 months. And that’s on top of the 12 trillion from 2008-2016 !

But just because it’s easy to understand the case for hyperinflation doesn’t mean it’s true.

Investors have been down this road before and been caught wrong footed when sustained inflation failed to materialize. This is probably what we should expect again.

Gerald P. Dwyer, in an article for the American Institute for Economic Research titled Signs of Inflation so Far (Mar. 2021), shows a mixed bag with some signs of a surge, but no strong sign of a meaningful amount or duration.

So, inflation? Yes. But a transitory spike, not lasting and far from hyperinflation.

In the other corner, deflation.

Lance Roberts’ article from March, 2021 is a fantastic read for anyone who wants to get a big picture view of the forces at play. It also has some stellar charts and graphs, like this one:

It shows the velocity of money since 1960. As you can see, it has been rapidly decreasing since the late 1990’s. Incidentally, this is also the time the Greenspan Fed starting creating massive (by the standards of the day) liquidity and blowing the dotcom and housing bubbles.

Also note – the precipitous plummet in 2020 due to the COVID-19 lock-downs. Will the velocity increase? It’s too soon to tell, but it is unlikely to break the long term downward trend for the foreseeable future.

Other factors and trends favoring deflation include:

Demographically speaking, the population in America is aging and reproductive rates are lagging. This is a trend across the western world and not specific to America. But the fact remains, there is no coming surge of young workers waiting in the wings to replace retirees and drive wages higher.

Technology is inherently deflationary and with wrong-headed government policies driving up the cost of employment (“Affordable” Health Care Act pushing up the cost of health insurance, Minimum Wage laws, Paid Family Leave , etc..), it’s increasingly more affordable and economically preferred to replace employees with technology. From robots replacing warehouse workers to iPads replacing waitstaff in restaurants, the trend is clear and it is a deflationary one.

Debt was at the root of the 2008 crisis, and since then it has only grown. Again we turn to Lance Roberts. This time from his article in Oct, 2020 titled: Why Debt-To-Income Ratios Are Worse Than They Appear :

As you can see, household debt has never been higher. Factor in government debt at all levels and you can see there’s a huge hole to fill. That’s going to eat up a lot of income and it’s still growing.

Lastly are the asset bubbles the Federal Reserve has created in the past 12 years. Thus far, inflation has been mostly contained to asset bubbles (stocks, real estate, bonds..) and when those bubbles finally burst, that will be hugely deflationary.

Why Deflation Will Reign Supreme.

Inflation is coming. The money created and dropped into the system is indeed unprecedented in magnitude, but it is not lasting. The deflationary factors mentioned above seem poised to win out in the end.

However, the Federal Reserve and Federal government will not go down without a fight. It’s looking increasingly like the battle between inflation and deflation will play out similar to how it has over the last few decades – as a give and take. This tug-of-war will lead to periods of inflation, followed by deflation and eventually deflation is likely to overwhelm efforts of the government in our opinion.

But what about Stagflation?

Stagflation is persistent high inflation combined with high unemployment and stagnant demand in a country’s economy.

Demand (as measured by the velocity of money) has been on a clear downward trend. This hasn’t been a problem for the past 30 years because inflation has been tame (at least as measured by CPI) but if prices rise without demand following suit, that will become a problem.

Stagflation is a real risk in our opinion because as the government steps up its printing and deficit spending inflation may become more persistent.

Take a moment and revisit that list of deflationary factors above and you’ll see why it’s unlikely that demand will rise anytime soon.